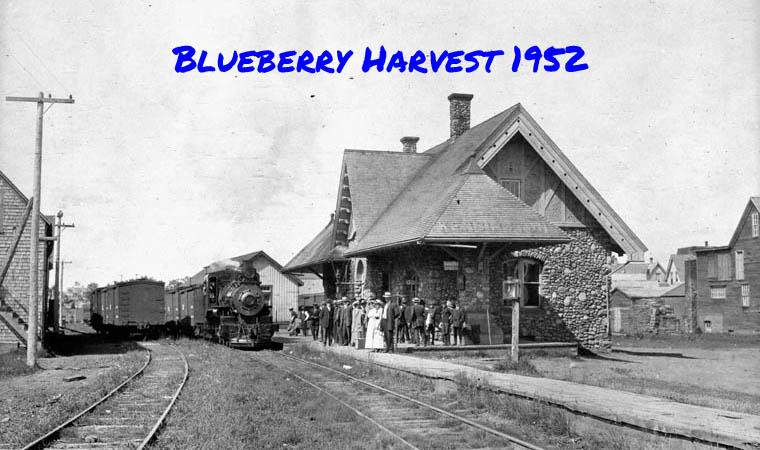 This article appeared in The Guardian September 13, 1952

Described as a good average crop, though far below that of 1950, the blueberries grown here are providing a source of income to a large number of people. It is expected that eight carloads will be shipped by rail to the various parts of the United States before the season ends.

Mr. John E. Cousins, Park Corner, said one carload was shipped to Boston last Saturday and arrived Monday. Another was shipped to Chicago. Orders have also been received from New York and Milwaukee.

The crop this year, said Mr. Cousins, who processes about 250,000 pounds each year, is slightly ahead of last year and the quality is very good. The market for the berries is firm with several factors entering it. One is that the Maine crop is down to approximately 60 per cent of normal, Nova Scotia blueberries are barred from the United States market, and the New Brunswick crop is also down greatly.

In Prince Edward Island the best growing areas are in the eastern part of the Province ranging through from Mt. Stewart to Murray Harbour. Formerly there was a considerable quantity received from the western part, but Mr. Cousins noted that the increased value of Irish moss and clams induced former berry pickers in that area to devote their time to those products.

Because of the fact that the province of Newfoundland was now beginning to ship its blueberries the market would be somewhat slow for the next three weeks. However, he predicted that things would be brisk again after that time.
A factor entering into the matter of the reduced income for assemblers this year is the currency situation with the United States dollar losing on the exchange. He said this made a difference of three cents per pound in the total received.

Mr. Cousins was of the opinion that blueberries added a fair slice to the income of many people here in a comparatively short period of time. Most of the freezing and assembling he does is conducted at Kensington, but he buys over a wide area. He has 20 employees regularly employed during the season in the plants and a large number of others who pick when the berries are ready.

The biggest year he can recall in the industry here was 1950 when the pack ran to 690,000 pounds which meant that 23 carloads were exported from here. He called that an exceptional and did not expect it ea
first race, anyway!